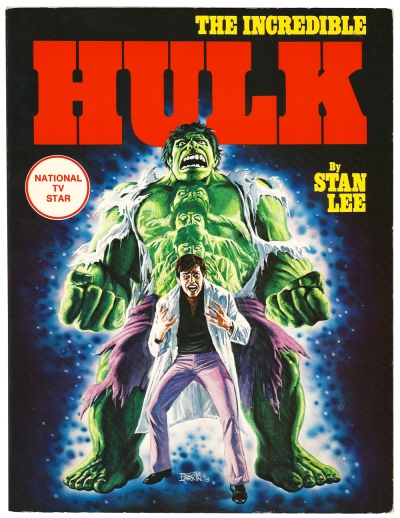 The Incredible Hulk by Stan Lee

In the autumn of 1974 Fireside Books published a softcover collection of reprinted stories featuring characters from Marvel Comics’ popular back catalogue, and today Origins of Marvel Comics by Stan Lee is now widely considered to be the first trade paperback. It was such a success that more volumes of reprinted material followed between 1975 and 1979, including The Incredible Hulk by Stan Lee published in 1978.

This collection follows the formula established in this reprint series but with a couple of minor differences. As with the previous volumes Lee bookends the collection with a preface and epilogue as well as four text pieces in which he credits the stories artists and briefly discusses the genesis of the stories. (He also admits to some early confusion over the name of The Hulk’s human alter ego – originally called Dr Bruce Banner Lee mistakingly referred to him as Bob in several stories resulting in the character being renamed Dr Robert Bruce Banner).

Unlike the other books in this series, this volume is slightly larger than the others, measuring 210mm x 277mm – a good inch taller and wider. The bigger size suits the larger-than-life subject matter and the stories benefit from the larger format. The second change is in the overall tone of Lee’s texts which feel more light-weight and are clearly aimed at a younger audience. As Fireside Books was the young readers imprint of Simon & Schuster this lighter tone is hardly surprising but it does jar a little with the other Marvel reprint books which are clearly aimed at a more mature audience.

The art duties are handled by Jack Kirby, Steve Ditko, Gil Kane, Micky Demeo (the pen name of Mike Esposito) and Golden Age veteran Bob Powell – the latter two working to Kirby’s breakdowns. Although Kirby’s grandiose artwork is a perfect match for the green-skinned monster’s action-packed adventures, Ditko’s style is too delicate and graceful to be convincing while the usually reliable Kane makes The Hulk look odd and angular. Esposito’s and Powell fair even worse and their contributions are the weakest of the bunch.

Since the bulk of the stories reprinted in this collection run consecutively, the reader gets a very clear idea of how much The Hulk changed during the first five years of his publication history, and how difficult a time Lee had in drawing a bead on the character. Originally intended as a modern day retelling of the Jekyll and Hyde story – Banner is a typically shy science nerd while The Hulk is domineering and essentially amoral – the character failed to find an audience and his monthly title was cancelled after just six issues. The Hulk was then moved to the monthly Tales To Astonish where Lee struggled to pinpoint the emotional core of the monster and made several attempts to revamp the character, most of which are included in this collection. He first had sidekick Rick Jones gain the ability to control the monster telepathically. He then ditched the restricting concept that Banner can only become The Hulk at night and instead introduced the idea that Banner’s elevated heart rate triggers his metamorphosis. Lee also began to dim The Hulk’s intelligence, making him more innocent and childlike, not unlike Boris Karloff’s sympathetic portrayal of Frankenstein’s monster. He even tried combining The Hulk’s strength with Banner’s intellect but the character still didn’t quite click. But slowly, over time, the core elements of the character began to fall into place culminating with Lee revealing Banners’ secret identity to the world – possibly marking the first time a comic book hero’s secret identity was made common knowledge (I’m not counting The Fantastic Four as they never tried to hide their real identities). It’s only then that The Hulk seemed to hit a chord with reader’s but sadly that story, which originally saw print in Tales To Astonish #77 (March 1966), is not included in this collection.

As usual last word goes to Bob Larkin‘s painted cover and it’s another winner – The Hulk looks suitably powerful and Banner looks genuinely terrified. His artwork really does justice to this over-sized and entertaining collection of The Hulk’s earliest adventures, second-hand copies of which can be found on Amazon and ebay for around £20.

Next: Stan Lee presents The Best of Spidey Super Stories from 1978