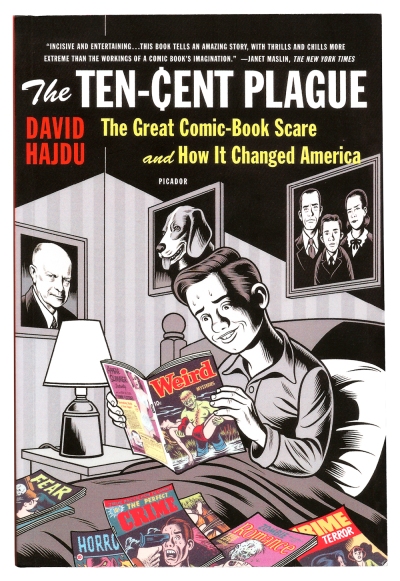 Halfway through The Ten-Cent Plague, David Hadju’s excellent account of the American comic book witch-hunts of the 1950’s, there is an anecdote concerning Will Eisner, creator of the hugely influential The Spirit and one of the industry’s elder statesmen. Eisner was at a cocktail party in New York in 1953, and after spending a pleasant evening chatting with one of the other guests, the conversation turned to careers. When asked what he did for a living Eisner replied “I write comic books” whereupon the guest walked away in disgust. For Eisner it was just one more insult to his chosen profession and even though he had already scaled back his involvement in the industry, he turned his back on mainstream comics and wouldn’t return for almost 30 years. Sadly Eisner’s experience was by no means unique and illustrates the level of condescension and mistrust directed towards those who had chosen to work in the filed of comics.

Beginning with the birth of the medium, when Sunday newspapers began printing supplements of cartoon strips, Hadju recounts the industry’s birth and the events that almost led to its death. Beloved by both the lower classes and growing immigrant population (many of whom learnt English by reading comics) Sunday strips were immediately written off as infantile and unsophisticated by the intellectual elite. Unwilling to acknowledge the medium’s status as the first true working class American art form, they instead took the snobbish view that anything enjoyed by the lower classes couldn’t possibly be good and therefore should be shunned. Undaunted by the criticism those Sunday strips proved so popular that in the mid-1930’s they were reprinted as standalone comics aimed at children. When they too proved popular publishers commissioned writers and artists to create new content and the comic book as we know it was born.

Other publishers followed suite and soon a new, and hugely profitable, industry was created; within 10 years the number of monthly titles would exceed 700, generating millions in revenue. Demand soon outstripped supply and anyone who could hold a pencil could get work drawing comics – and make a decent living at it too, no mean feat for a country rocked by The Great Depression. The industry was also hugely egalitarian – it didn’t matter what sex you were, the colour of your skin or your religion, if you could write or draw you could find work in a medium where the demand for content outweighed prejudice.

As sales began to grow so did competition between publishers, all of whom were eager to discover, and exploit, the next trend to attract readers. 1942 saw the publication of Crime Does Not Pay, a comic that warned against the perils of crime while simultaneously revelling in its extremes. Other crime titles soon followed and the seeds of the industry’s downfall were planted, for at roughly the same time America became aware of a potential threat to its status quo: juvenile delinquency – through a accident of timing the two would became inextricably entwined.

Once the assumption of a link between comics and juvenile crime was made it became a hot topic that attracted politicians, intellectuals and religious leaders, all of whom took the opportunity to attack the medium, mostly for their own political gain. They accused comics of almost every possible form of social evil, from promoting fascism to encouraging organised crime and inciting children to suicide and murder. Even J Edgar Hoover jumped on the comic-bashing bandwagon and wrote a newspaper article warning of the association between comics and crime, although the notorious headline chaser withdrew his objections once it became clear there was no evidence to support that assumption. But by the late forties the damage was done and crime and comics were indelibly linked in the mind of the public.

To combat this perceived growing menace many states rushed through legislation to curb the sale of comics to children or to prosecute those who sold them; some went further and established special police units to arrest violators. Distrust of the medium was slowly descending into hysteria, culminating in one the the most troublesome incidents of the whole sorry affair: book burnings. The first took place in late 1948 when school children in West Virginia first collected and then burned thousands of comic books. Organised book burnings quickly spread to other schools throughout the country as teachers, journalists and civic leaders cheered on the practice. The irony of encouraging such a senseless act a mere three years after the Allies defeat of the Nazis appears to have been lost on the organisers of such events.

Strangely, comic book publishers were, on the whole, oblivious to the growing public outcry, so concentrated where they on discovering the next popular trend that would find favour amongst their readers. Romance comics had proved popular in the early Fifties but they were quickly eclipsed by a new genre: the horror comic. Within months dozens of this new comics filled the racks featuring grisly short stories of bloodshed and terror. Many critics viewed this new wave of titles as the last straw and condemnation of what many considered the lowest form of entertainment reached fever pitch.

Even though the chorus of anti-comics sentiment was growing louder, and shriller, the movement didn’t have a single voice behind which to rally. That changed in 1954 with the publication of Seduction of the Innocent by child psychologist Dr Frederic Wertham. Wertham claimed to have discovered an incontrovertible link between comics and juvenile delinquency and the anti-comics brigade finally had the evidence it needed to show how comics were corrupting the youth of America. Well, kind of. Wertham’s book was in fact lazily written, badly researched and provided no test evidence to back up his claims and as a result many of his conclusions were highly specious.

With this new ‘evidence’ in hand both the establishment and general public decided enough was enough. Senate hearings on the causes of organised crime now added the impact of comics to their remit, with Wertham appearing as their the star witness. One of the few industry leaders to take the stand in defence of comics was Bill Gaines, publisher of EC Comics’ best-selling horror titles and son of one of the original architects of the Industry. Gaines, who was suffering from exhaustion after spending several sleepless nights preparing his testimony, failed to make a good impression. His argument that the effects on the reader of horror, sex and violence in comics was down to that reader’s personal taste appeared to prove that comic publishers were amoral purveyors of sleaze who were determined to corrupt America’s youth. Realising that if they did not act to regulate themselves then the government would, the industry’s leaders formed the Comics Code Authority in 1954 and drew up strict new rules governing content. Every comic now had to be submitted to the CCA for its blessing and any publication not brandishing its stamp of approval would not be distributed or, in some cases, even printed. Unfortunately for Gaines the CCA’s first act was to ban all hints of horror and extreme violence, effectively banning all of his comics in one fell swoop. A bitter Gaines ceased publication of all his horror comics and was left to vent his anger and cynicism through the pages of his one remaining title, Mad magazine. Other publishers, even those who didn’t publish horror or crime comics fared little better and many folded almost over night leaving hundreds without jobs and livelihoods. The CCA’s strict rules may have mollified the medium’s critics but its draconian rules stifled the industry almost into extinction and it would take almost a decade for it to bounce back, albeit in a somewhat tamer form that concentrated almost entirely on superheroes.

Hajdu does an excellent job of recounting all these events in an informative and entertaining way and I’ve barely scratched the surface of what his book covers. The real strength of his book is that he never loses sight of the human story, and he gives voice to the many who thrived in an industry that actively encouraged experimentation and innovation. He also draws attention to those who suffered most when it was almost destroyed (one of the book’s appendices lists the many hundreds who lost their jobs after the creation of the CCA and it reads like a list of war dead). He also quotes some of the children involved in the book burnings, many of whom grew up regretting their actions and, ironically, began reading comics because of the publicity generated by the burnings. For many reading comics became an act of revolt and if the establishment believed they’d nipped that rebellion in the bud they would be in for a rude awakening when Rock and Roll emerged a few years later.

All told The Ten-Cent Plague is a hugely entertaining book about a fascinating period in American history. It was a turbulent time when Cold War paranoia ran rampant and Communists supposedly threatened to destroy the country from within. It was a time when one generation tried it’s hardest to stifle the rebellious nature of the next and when one of the greatest threats to the American way of life were the funny books.