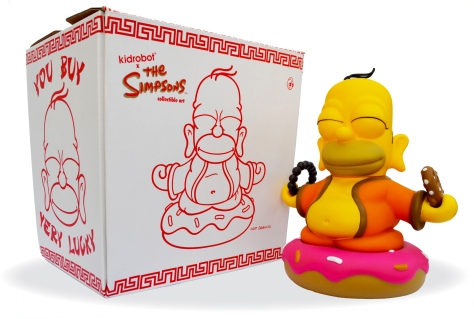 Released in September 2012, Kidrobot‘s Homer Buddha was a welcome addition to their range of designer toys based on The Simpsons.

Inspired by the episode Goo Goo Gai Pan from season 16 – Homer disguises himself as the Buddha in order to smuggle himself into an orphanage – this figure measures eight inches in height, two inches taller than Kidrobot’s other oversized toys. Homer Buddha has limited articulation to his head and comes with a couple of accessories: an oversized chocolate pretzel and some prayer beads. Out of all the Kidrobot/Simpsons toys this one is hand-down my favourite. The figure is very sturdy with the well-made, chunky feel that I’ve come to expect from Kidrobot. And it’s Homer sitting on a giant frosted doughnut… what’s not to like.

As with the other toys in this range I particularly like the care and attention Kidrobot have given to the box Homer Buddha comes in. Clearly modelled on a giant Chinese take-out box, it’s emblazoned with the slogan “You Buy Very Lucky” on the sides – all that’s missing are a giant pair of chop sticks.

A gold painted exclusive variant of this figure was released for the New York Comic Con in 2012. I’m sure it’s cool and all but I’m perfectly happy with the standard version, which, like all Kidrobot’s oversized figures, is a Limited Edition and now sells on ebay for over £50 ($80). For those for can’t get their hands on one I’ve posted a couple of photographs that I took of the little fella.