The 100th article celebrations continue here at ‘Taint The Meat with another selection of my favourite 100th issue comic book covers.

I stated in part 1 of this series that 100th anniversary covers rank as some of my favourites and by compiling them for these articles I’ve seen nothing to change my mind. However, I have noticed that they tend to come in five distinct categories.

First off there’s the overall tone cover, such as the ones for Captain America and The Walking Dead. These are eye-catching and bold images that represent the general theme of the title as opposed to depicting an actual scene from that issue. Then there’s the montage of faces cover, such as that from Ultimate Spider-Man; these covers play upon the history of the comic and remind the reader of the title’s ensemble cast. Next there’s the classic superhero line-up/face-off – two rows of characters squaring off for battle (The Defenders) – a simple but effective image.

Next is the unashamedly celebratory cover that emphasises the collectability of that issue, such as the covers for Batman and Vampirella. Lastly there’s the business-as-usual cover which depicts a scene representative of that issue’s story (The Fantastic Four and World’s Finest), usually accompanied by a flash drawing the reader’s attention to the issue’s number. Out of the five my favourite has to be the montage covers as they neatly combine the overall tone of the title with its history.

So with no further fanfare here are the next ten covers, with annotations… 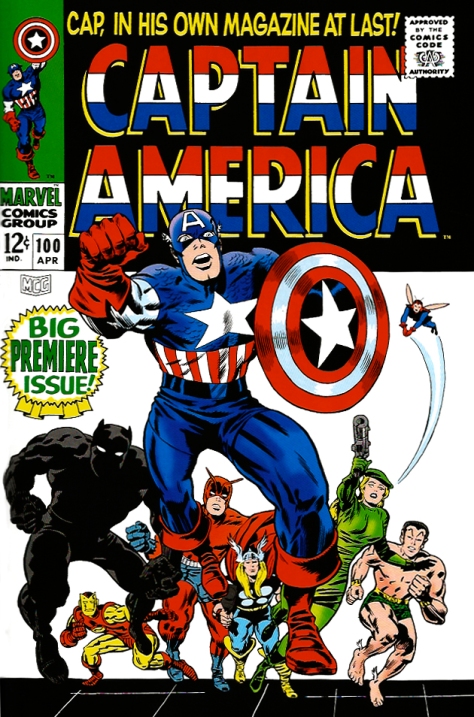 Captain America, issue 100
“This Monster Unmasked”, published by Marvel Comics, April 1968
Cover artwork byJack Kirby and Syd Shores
Bit of a cheat this one as it’s actually the 100th issue of Tales of Suspense which was rebranded as Captain America from this issue onward. Nonetheless it’s classic action-packed Kirby (who co-created the character with Joe Simon) with Cap leaping towards the reader flanked by The Avengers. 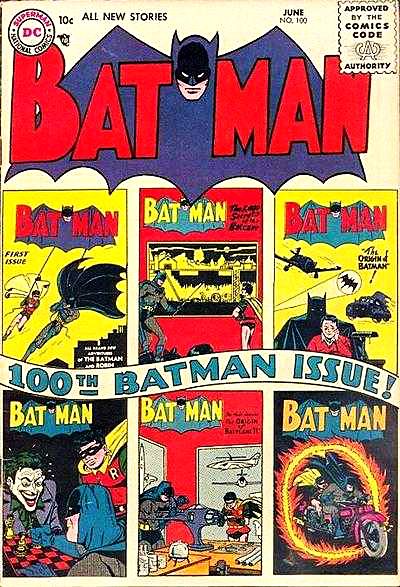 Batman, issue 100
“Batmantown, USA”, “The Hunters of Gotham City” and “The Great Batman Contest”, published by DC, June 1956
Cover artwork by Bob Kane, Dick Sprang, and Jerry Robinson
Published less than a year after Superman’s 100th issue this cover clearly features the same design and reproduces six classic covers from The Dark Knight’s past. As with the Superman issue this cover actually isn’t that interesting visually but it is a great landmark
issue for the character and the industry. 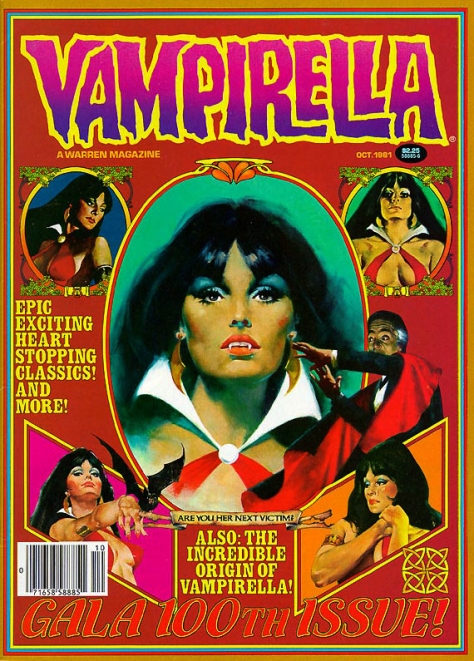 Vampirella, issue 100
Published by Warren, October 1981
Cover artwork by Enrique Torres, Jose Gonzalez, and Sanjulian
Vampirella was originally created by Forrest J Ackerman (editor of Famous Monsters of Filmland) and underground comix artist Trina Robbins and this ‘Gala’ issue features reproductions from five different painted covers from the characters past. It’s a pity Warren didn’t commission a new piece of artwork for this anniversary but
the cover still successfully emphasises the seductive appeal
of the popular vampire character.

Fantastic Four, issue 100
“The Long Journey Home!”, published by Marvel Comics, July 1970
Cover artwork by Jack Kirby and Joe Sinnot
Marvel’s flagship title hit the 100th issue landmark with this frenetic Kirby cover depicting the FF in battle against a host of their deadliest enemies. Although it’s an eye-catching cover I’m always a little disappointed that this wasn’t more of a celebration of the title’s impact on the comic book industry. Apart from helping to reinvigorate a tired Marvel it also helped to usher in a new wave of flawed and relatable characters that would become the publisher’s trademark. Perhaps realising that the cover missed
the mark a little the letters page for this issue contained an acknowledgement of the comic’s impact and a pledge from
Stan Lee and Jack Kirby to continue to create ‘The World’s Greatest Comic Magazine!”

Birds of Prey, issue 100
“Blood and Circuits, part 1 – A Chance to Do Good”,
published by DC, January 2007
Cover artwork by Jerry Ordway and Brian Miller
I mentioned in my introduction that montage anniversary covers rank as some of my favourites, and this one is terrific.
A reflective Oracle (Barbara Gordon) is surrounded by prospective new recruits for her team – a roll call of some of DC’s most powerful female characters. Simple, elegant and eye-catching.

The Walking Dead, issue 100
“Something to Fear, part four”, published by Image, July 2012
Cover artwork by Charlie Adlard
One of 15 variant covers released by Image to celebrate the 100th issue of Robert Kirkman’s hugely popular zombie comic. I must confess that I’m not actually a massive fan of this series but this wrap-around cover by Adlard is beautiful, in a hauntingly macabre way. Depicting the title’s main character, Rick Grimes, standing amongst the corpses of those that have died in the series (including his baby) is a masterstroke on Adlard’s part.

The Defenders, issue 100
“Hell on Earth!”, published by Marvel Comics, October 1981
Cover artwork by Al Milgrom
The Defenders 100th anniversary issue features a great superhero line-up that is clearly reminiscent of the cover from X-Men issue 100. This epic double-sized issue sees the team defend the Earth from the denizens of Hell. 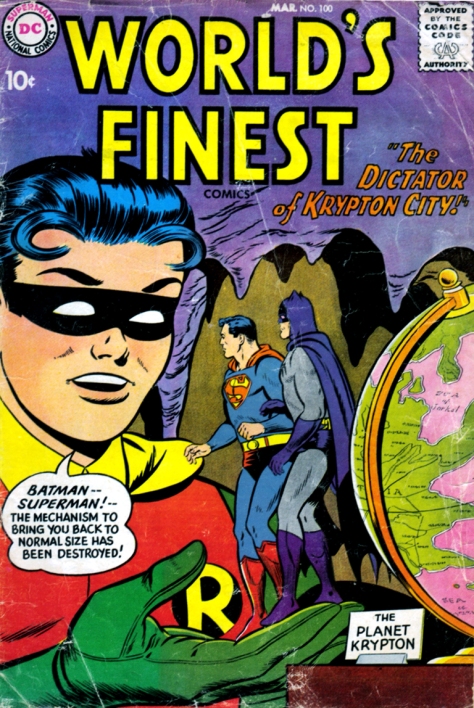 World’s Finest Comics, issue 100
“The Dictator of Krypton City”, “The Mystery of the Vanishing Boys” and “The Case of the Green Error Clown”,  published by DC, March 1959
Cover artwork by Curt Swan and Stan Kaye
DC’s long-running anthology series (it saw print for almost 50 years) hit its 100th anniversary with a suitably pulpy cover featuring title mainstays Superman, Batman and Robin. Legendary Superman artist does a great job here with a simple yet bold cover.

That’s it for this article. I’ll post the last ten covers in the next day or so (click here).