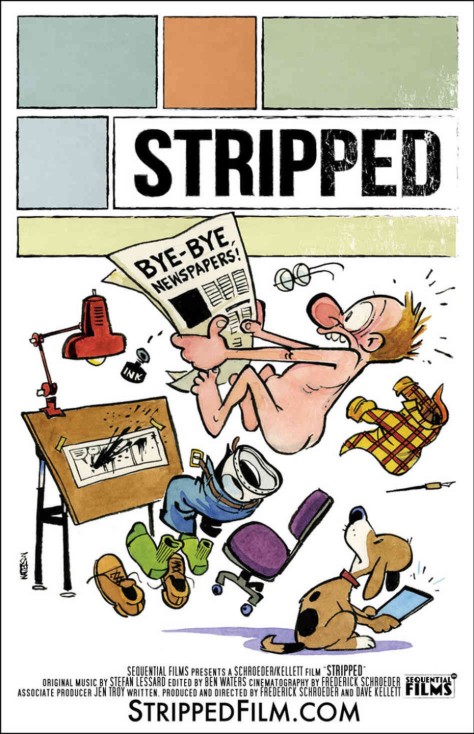 Since their debut in the late 19th century American newspaper cartoon strips has enjoyed a level of respectability and adoration not afforded to many other forms of popular entertainment. A new documentary, Stripped,  attempts to examine the reasons for the success of this enduring and much-loved art form, while also considering the challenges that the medium faces in the future.

Frederick Schroeder and Dave Kellett’s feature-length documentary first came to the public’s attention when they successfully launched two Kickstarter schemes to help fund the film. The project generated more excitement when they announced that Bill Watterson, the notoriously publicity-shy creator of the beloved strip Calvin and Hobbes, had consented to be interviewed for the film (he also illustrated the film’s theatrical poster).

With interest running so high it just remained to be seen if the documentary itself would match the hype. Thankfully Schoeder and Kellet have created a thoughtful and thoroughly entertaining film, one that explores both the industry and its artists in great depth. The creative process behind the cartoons is also examined as well as the difficulties of selling a strip to a syndicate and the daunting prospect of constantly facing a daily deadline.

Although Stripped concentrates mainly on contemporary cartoons it doesn’t ignore the industry’s roots and acknowledges the debt of gratitude daily strips owe to their vintage Sunday counterparts, such as Windsor McCay’s wonderfully sublime Little Nemo, and Hal Foster’s hugely influential Prince Valiant. And no film on the newspaper strip would be compete without recognising the most cherished of them all, Charles Shulz’s Peanuts.

With US newspapers closing with increasing frequency (166 have closed since 2008) the cartoon strip is in a state of flux, and the fear that the industry will be left without a platform is a genuine one. Ironically its salvation may well lie with the print medium’s greatest threat: the internet. More and more artists are by-passing the traditional print syndicate route and self-publishing their work online, and relishing the artistic freedom this offers. Some have been rewarded with great success: Mike Krahulik and Jerry Holkin’s online strip Penny Arcade for example has over three million regular readers.

Stripped reveals the artists behind this much loved medium and it does so in an affectionate and inventive fashion (the wonderful 8-bit arcade game sequence is worth the price of admission alone). From it’s nostalgic opening sequence to Kate Micucci’s delightful end-credit contribution that distills the 17,000 year history of sequential art down to a snappy two minute song, Stripped celebrates an art form that will always endure. True, it may have to adapt from ink to pixels to survive, but the newspaper strip will never fade away.