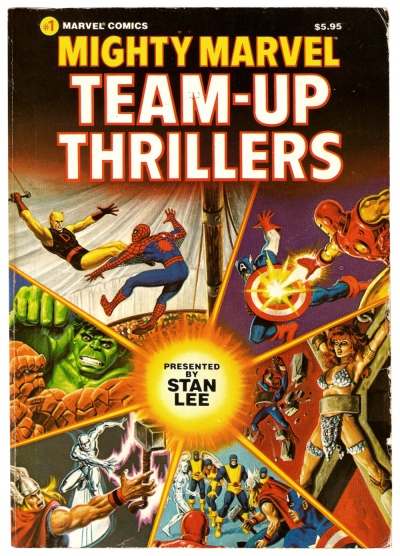 Comic book reprint collections, or trade paperbacks as they are commonly known today, make up a large and vital part of the industry, earning publishers tens of millions in revenue. But 40 years ago the format was almost unknown and Marvel’s path to publishing their own trades wasn’t a straightforward one.

The concept of reprinting comic book stories was hardly new. If one looks back to the birth of the medium in the mid-1930’s the very first comic books were reprints of newspaper strips, repurposed and aimed at kids. Publishers quickly exhausted those old stories and so new material was commissioned, thus giving birth to a new entertainment medium. It’s strange to think that it took the industry another 40 years before attempting to repackage those new stories.

By the mid-1960’s, during the medium’s second resurgence, or Silver Age, the idea of repurposing previously bought-and-paid-for material must have seemed both attractive and lucrative, a quick way for publishers to wring more revenue from old content. (Reprint comics however were not a new concept — Marvel published several monthly and bi-monthly titles that featured repackaged material). Marvel therefore entered into a deal to publish reprints in book format, in the hope of bridging the gap between comics and books.

In 1966 a deal was brokered between Marvel and Lancer Books that saw the established paperback publisher release six volumes of reprints (click here for a more detailed look). Unfortunately the books failed to win an audience — poor print quality, black and white reproduction and cropping of artwork being mostly to blame.

In 1974 Marvel tried it’s hand at reprint books again, this time with oversized softcover collections aimed at the holiday market. These collections, released under several names but collectively known as Treasury’s, went some way to establishing the legitimacy of the reprint format. But, even though Marvel oversaw the publication of these collections in-house, Treasury’s were aimed solely as comic book fans and didn’t grab the attention of book readers, a market they dearly wanted to attract.

It wasn’t until Marvel negotiated a publishing deal with respected publisher Simon & Schuster that things began to come together. Their first collaboration — Origins of Marvel Comics — introduced many of the ingredients now familiar to modern trade paperbacks: the stories were printed in colour; the book was perfect bound and of a high quality and each of the six stories reprinted featured introductions by Marvel legend Stan Lee. The collection was clearly aimed at comic book fans and book readers alike and it hit just the right balance of geekdom and respectability. The book was a bestseller and over the next five years ten more reprint volumes followed as well as an original book, The Silver Surfer: The Ultimate Cosmic Experience, now widely regarded as the first Graphic Novel.

Bolstered by the collections success the two publishers experimented once again with the smaller paperback format; between 1977 and 1980 ten full-colour reprint collections were released under Simon & Schuster’s Pocket Book imprint. (Marvel also did a deal with Ace Books for a six volume reprint series featuring fan-favourite Conan The Barbarian).

So by the early 1980’s, after almost a decade of successful collaborations with other publishers, Marvel felt the time was right to publish their own trade paperback. Mighty Marvel Team-Up Thrillers volume #1 (there wasn’t a volume 2) was released in 1983 priced at $5.95. The format of the book mirrored that established by the Simon & Schuster collections — six repackaged stories sharing a common theme, reproduced in full colour with text introductions by Lee. The book also sported a painted cover by Bob Larkin, who contributed four covers to the original Simon & Schuster run. Marvel even went so far as to list the previous Simon & Schuster collections at the beginning of the book —  they were clearly sticking as close as possible to the winning formula established by Simon & Schuster.

The six stories reprinted in this collection were a selection taken from Marvel’s Silver Age. Kicking off the volume was the classic throw-down between The Silver Surfer and The Mighty Thor in “The Good, the Bad, and the Uncanny!” reprinted from The Silver Surfer issue #4 (originally published February 1969). Next up was a story starring Captain America and Iron Man, “In Mortal Combat with Captain America!”, from Tales of Suspense #58 (October 1964). Spider-Man and Red Sonja appeared next in “Sword of the She-Devil” from Marvel Team-Up #79 (March 1979). The fourth reprint starred The X-Men battling The Avengers in “Enter, the Avengers!” from The X-Men #9 (January 1965). The Thing and The Hulk appeared next in “Cry: Monster!” from the short-lived Marvel Feature #11 (September 1973). And wrapping up the volume was a classic Silver Age tale featuring Spider-Man and Daredevil, “Duel with Daredevil”, from The Amazing Spider-Man #16 (September 1964).

In a similar vein to the Simon & Schuster collections Lee introduced the book as well as all six stories utilising his trademark light banter. He praised the writers and artists involved in the collection and generally chatted with the reader with a self-effacing style instantly recognisable to regular readers of Marvel’s comics.

Overall the collection is a strong one and a fine first effort for Marvel. All six stories range from good to great with a couple of minor classics thrown in for good measure. My only gripe with the collection is the cover. Ordinarily I’m a great fan of painted comic art, and I like Bob Larkin’s efforts from the original Simon & Schuster collections, but this cover just doesn’t work for me. There’s too much going on and the cover has little overall impact. One larger bold image would have worked better than six smaller ones.

Since the publication of Mighty Marvel Team-Up Thrillers trade paperbacks have grown into an industry mainstay. Thousands of reprint collections have been published, not only by Marvel but by all the major comic book publishers.  Mighty Marvel Team-Up Thrillers may be all but forgotten today but it serves as a reminder of a time when Marvel realised the true potential of the trade paperback, and helped change the comic book industry forever.