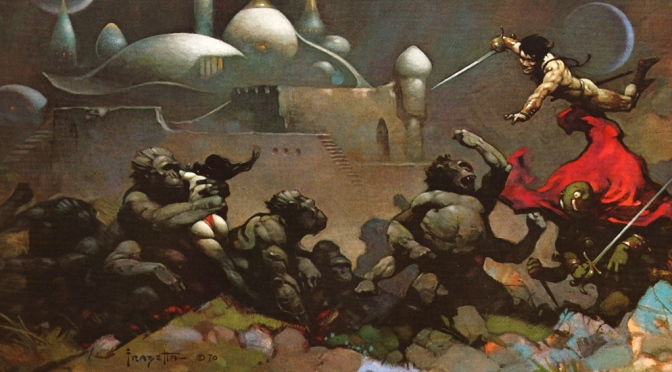 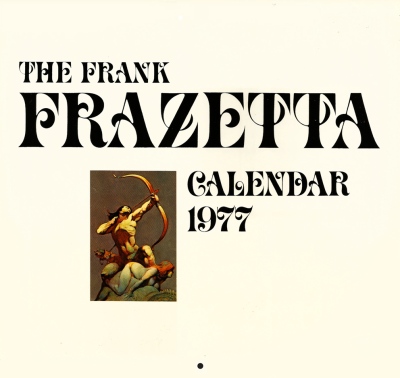 The Frank Frazetta Calendar 1977 was the first calendar that featured paintings from the popular fantasy artist.

Frank Frazetta shot to prominence a decade earlier when his paintings featured on the covers to Robert E. Howards’ Conan the barbarian novels, published by Lancer Books. Frazetta’s evocative and beautifully painted covers proved an instant hit with readers and he quickly became one of the most sought after artists in the fantasy genre. Indeed the artist became so popular that the name Frazetta has become synonymous with fantasy illustration.

Published in 1976 by Rufus Publications The Frank Frazetta Calendar 1977 full colour featured reproductions of 13  paintings by the artist. Rufus had previously enjoyed great success a couple of years earlier with The Fantastic Art of Frank Frazetta, a 96 page art book that showcased the artist’s work. The calendar was clearly meant as a companion piece to that book as it featured the same typography and design – even the numbering of the prints in the calendar continued directly from the book.

The calendar measured 320 x 305 mm and was printed on bright white paper stock with a thicker card cover, and it sold for $4.95. Each month featured a full-page Frazetta painting, along with that month’s dates on the page below, while the centre spread featured a reproduction of The Destroyer, one of the artist’s most popular paintings. On the back cover was a short biography of the artist as well as contact details for those who wished to purchase reprints.

The Frank Frazetta Calendar 1977 was such a success that a new calendar based on the artist’s work has appeared almost every year since. I have a copy of the 1979 calendar which I’ve posted here, and click here for a look at the 1978 edition. In the meantime here’s the one from 1977 – click on the images for larger versions. (Please note: some of the paintings feature mild nudity). 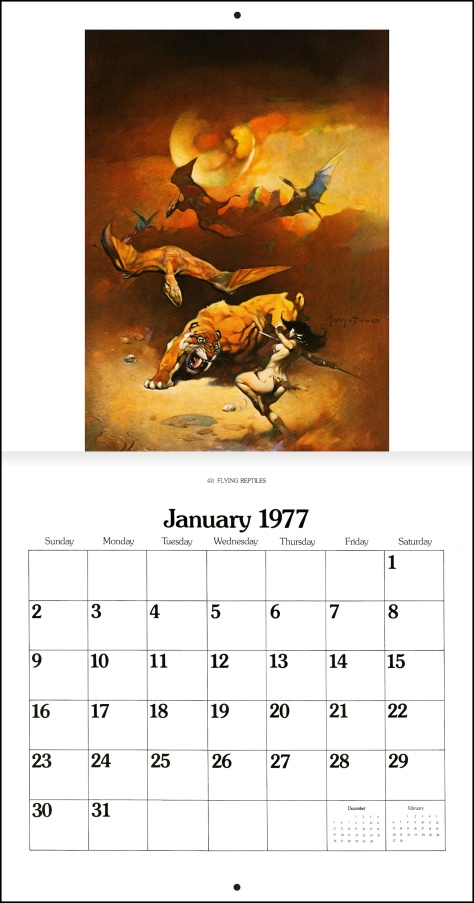 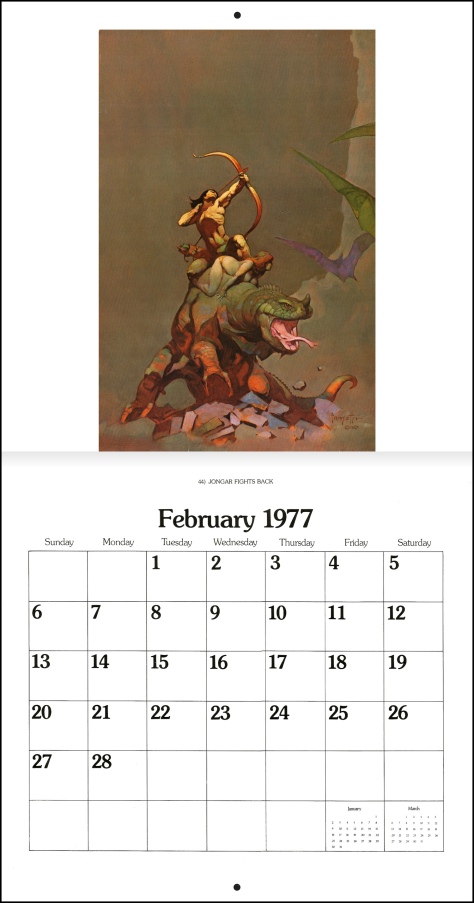 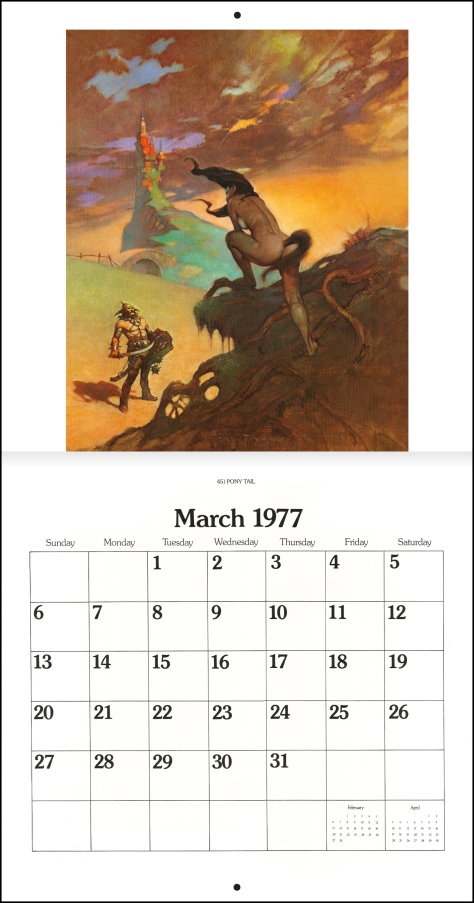 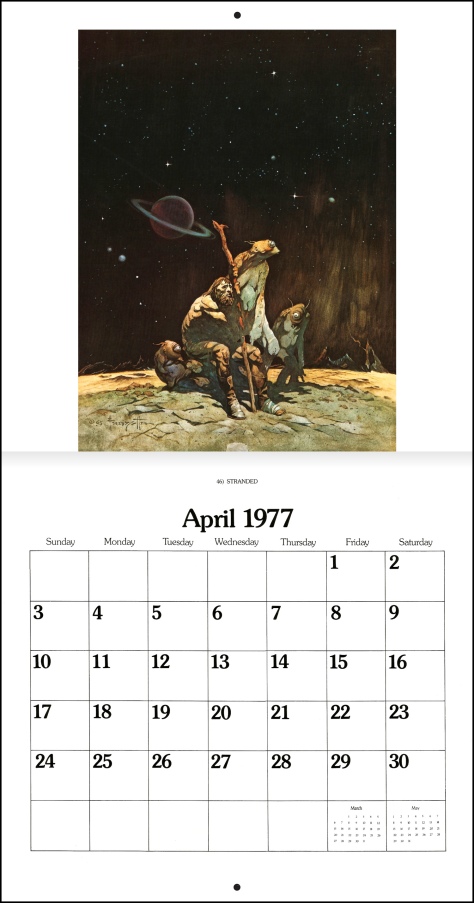 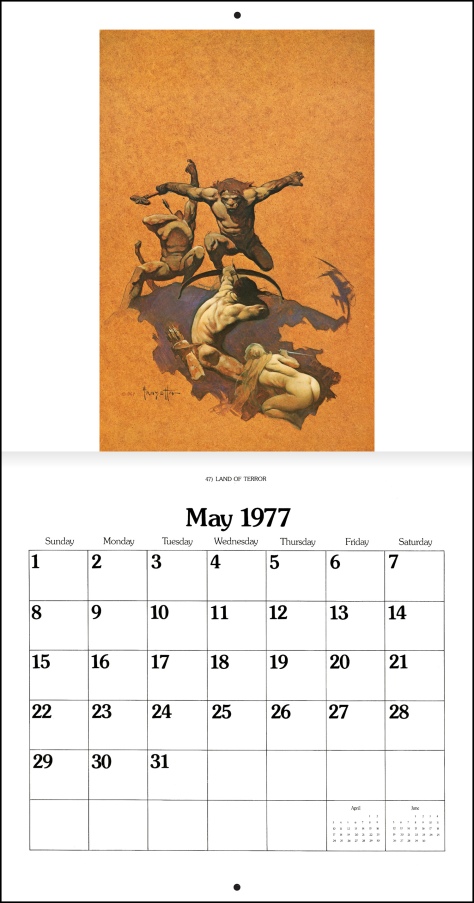 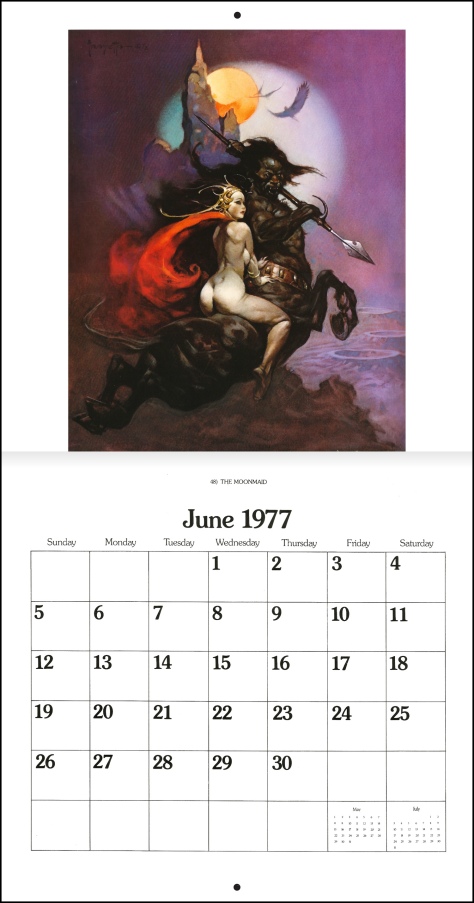 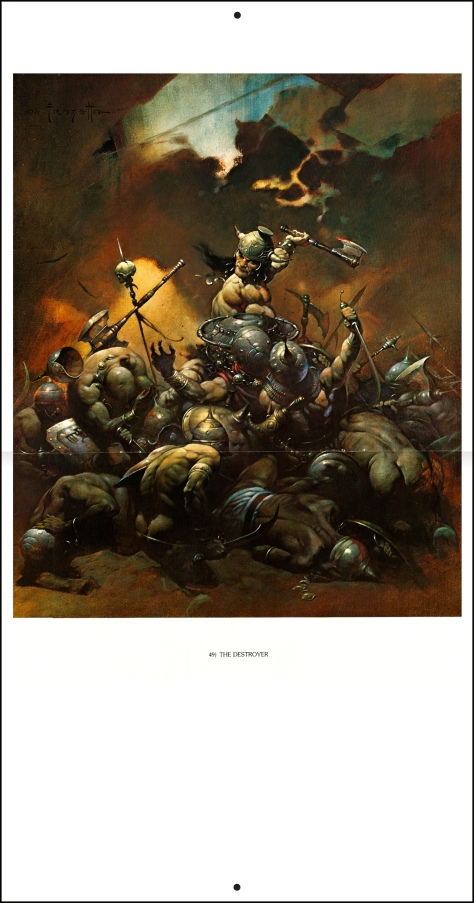 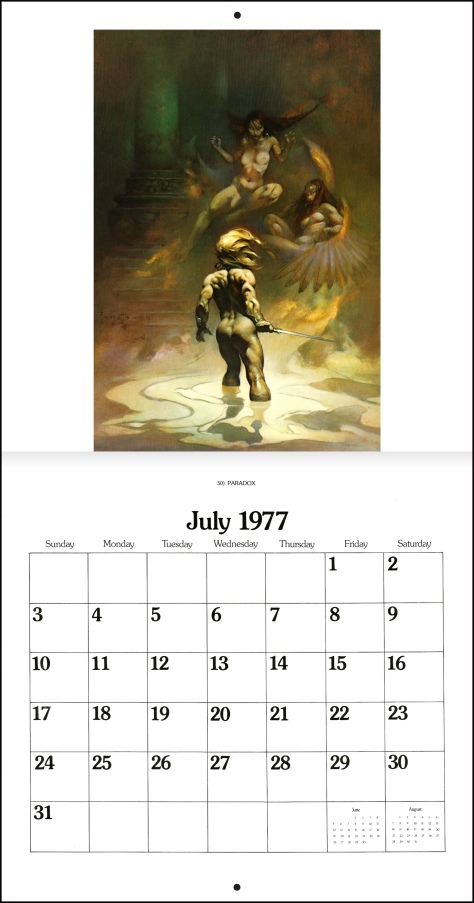 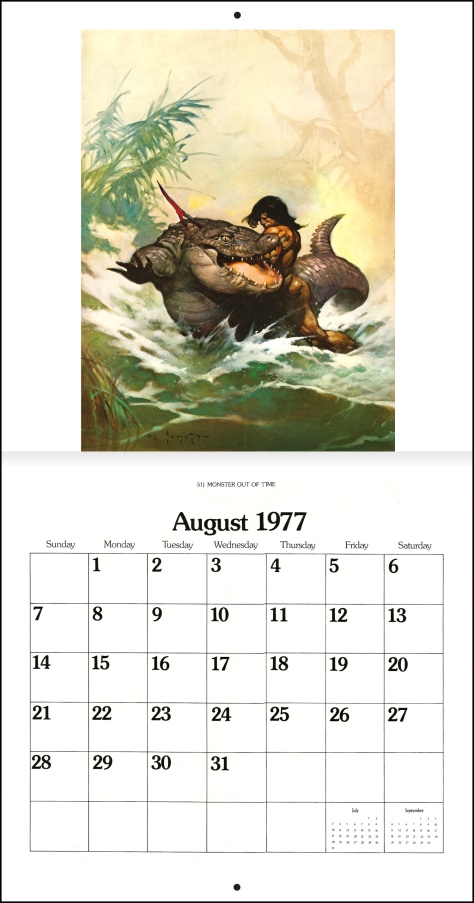 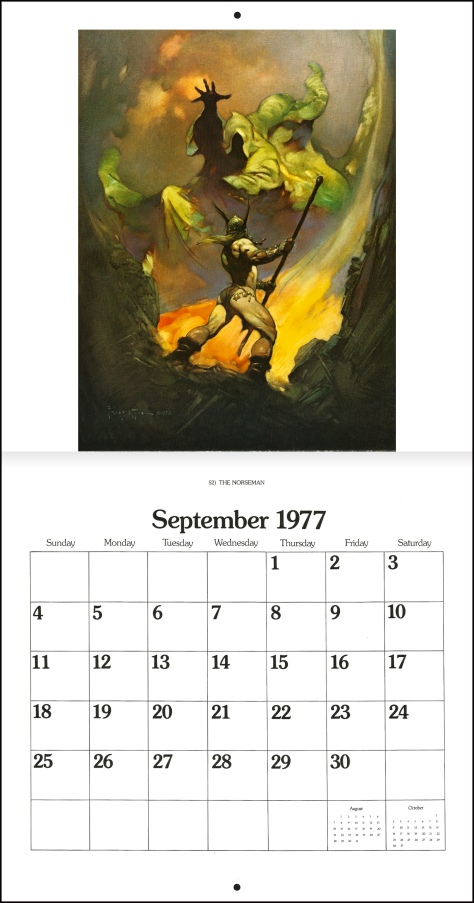 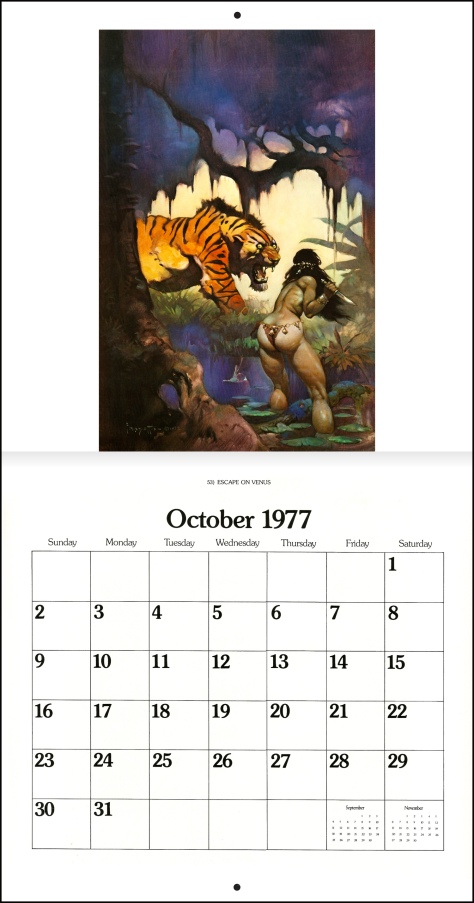 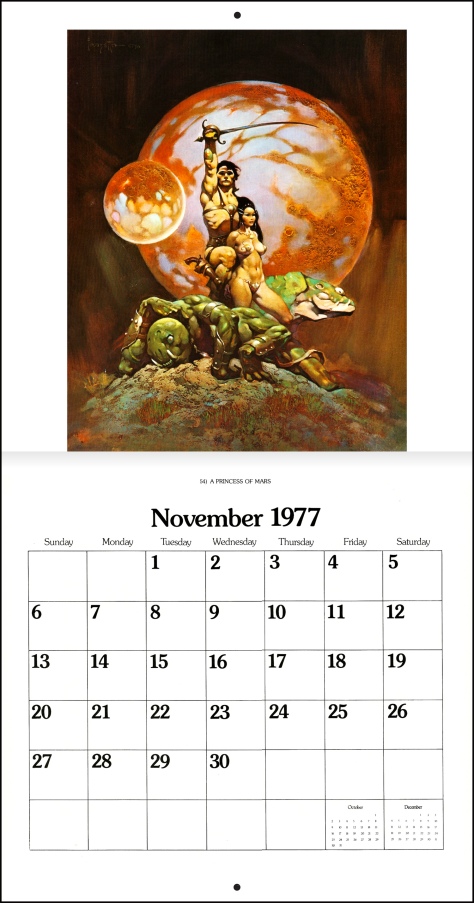 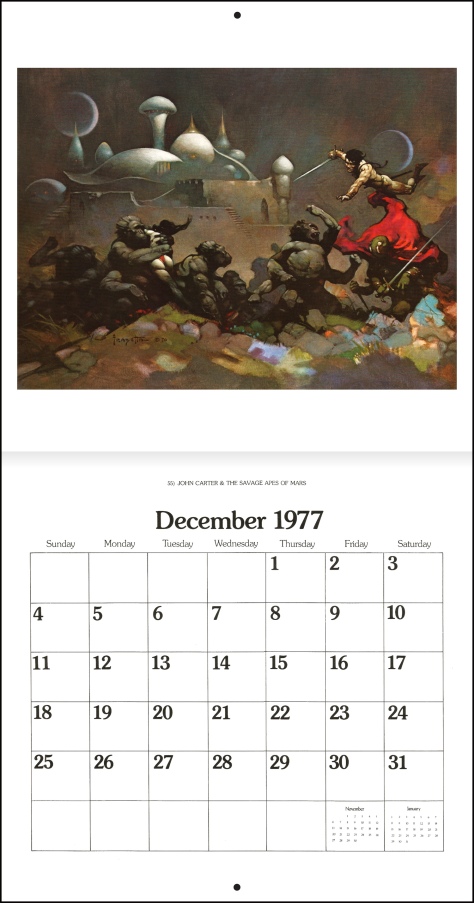