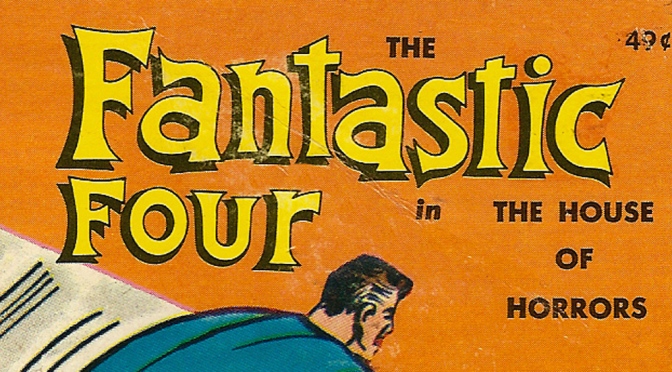 By the mid-1960’s Marvel Comics’ The Fantastic Four had seen the stars of the ‘The World’s Greatest Comic Magazine!’ square-off against some imposing and oversized enemies. But in 1968 they featured in an adventure that was a little more diminutive than they were used too.

The Fantastic Four in The House of Horrors was published by Whitman in 1968 and was part of their long-running Big Little Book series. It was written by William Johnston, who authored other books in the range, and featured Marvel Comics’ premier superhero family matching wits with the evil Dr. Weird. The book, which ran ran to 254 pages and measured a pint-sized 95 x 123mm, followed the same format as Whitman’s other Big Little Books: the text of the story ran on the left hand page accompanied by a single panel illustration and short caption on the opposite page. Although the book was clearly aimed at younger readers it was still an action-packed read and Johnston stayed loyal to the comic’s premise of team-work and high adventure.

The Illustrations, of which there were over a hundred, were pencilled by Marvel newcomer Herb Trimpe and inked by John Verpoorten. For the sake of consistency Trimpe was instructed to mimic regular FF artist Jack Kirby’s iconic art style, and he did a bang-up job. Too good a job in fact as most casual readers just assumed Kirby was responsible for the artwork (this misconception wasn’t helped by Whitman’s decision to reprint a few panel’s of Kirby’s artwork). Eagle-eyed readers though can spot some of Trimpe’s tell-tale artistic flourishes: the rounded cheek bones and character body language are dead giveaways.

Beginning with The Adventures of Dick Tracy in 1932 Whitman published over a thousand Big Little Books, mostly in hardback with colour illustrations. However, my copy of The Fantastic Four in The House of Horrors is the softcover reprint from 1976 which featured a slightly different coloured cover and black and white illustrations. Despite the success of Whitman’s Big Little Books, only two featured Marvel superheroes, this one and Spider-Man Zaps Mr. Zodiac also from 1976.

Here are a few more pages from The Fantastic Four in The House of Horrors — award yourself a Marvel No-Prize if you can spot the reprinted Kirby artwork. 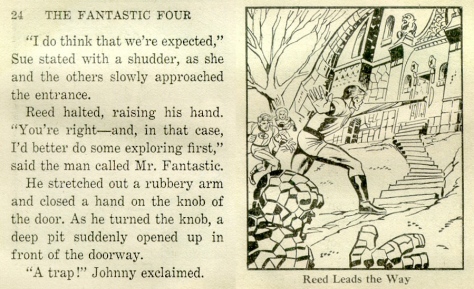 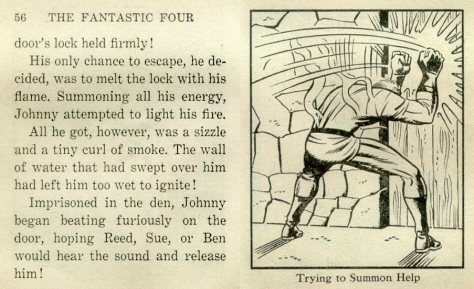