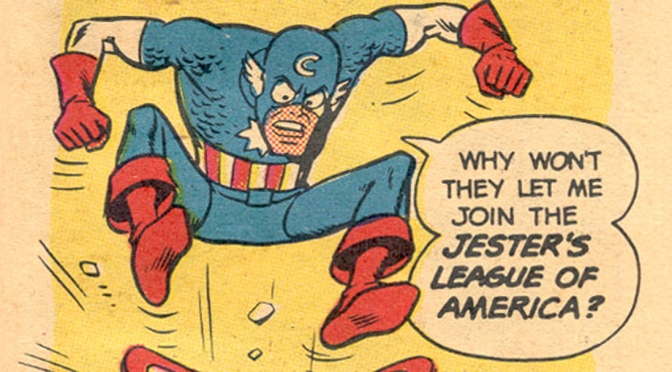 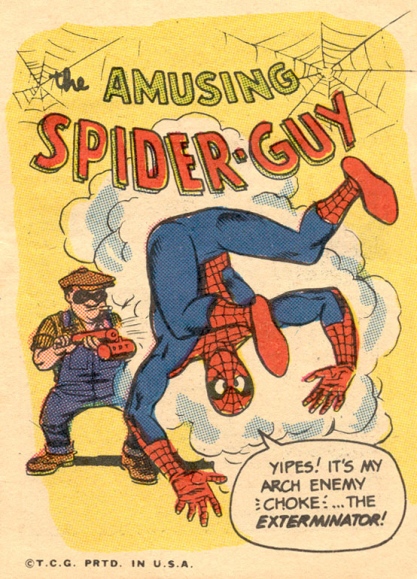 In the mid-1960’s bubblegum giant Topps attempted to capitalise on the popularity of superhero comics with a range of gifts that would feature humorous parodies of some of the industry’s most popular characters. But rather than cashing-in on the new boom in superhero comics they instead learned an expensive lesson in legal due diligence.

Topps Krazy Little Comics was a collection of 16 small, full colour comics that was due to be released in 1967. Each mini-comic would feature a humorous pastiche of various superhero’s published by Marvel, DC and the King Features Syndicate: Captain America, for example, became Captive American; Batman was lampooned as Badman; Tarzan Tarsam, and so on. The back cover also featured a parody of the small ads that all comic book readers would have been familiar with. Each 2½ x 3½ inch comic ran to eight pages and was printed on cheap newspaper stock; each comic would ship with one piece of gum and was sold for 5¢.

Although the comics were, by their very nature, pretty cheap that doesn’t mean Topps skimped when it came to creating them. They were written by future Marvel Editor-in-Chief Roy Thomas, the artwork was provided by EC Comics veteran Wally wood, and the back cover ads were drawn by Art Spiegleman, who would go on to win a Pulitzer Prize for his holocaust survivor graphic novel, Maus. (I’ve also heard that DC and Marvel stalwart Gil Kane pencilled the stories, with Wood inking, but I haven’t been able to verify that from another source. The artwork certainly doesn’t reflect Kane’s distinctive drawing style).

Topps apparently believed that, since the comics were satire, they weren’t subject to copyright law and pushed ahead without obtaining permission from Marvel, DC or King Features. However, Topps’ lawyers eventually advised caution and the entire range was dropped, with none of the comics being released officially. How close Topps came to releasing the comics is impossible to say, but the fact that copies of the comics routinely appear on ebay would suggest Topps were quite far down the road when the plug was pulled.

As for the comics themselves, they’re actually quite fun. The books were clearly heavily influenced by Mad magazine, and although the gags are groan-worthy that really just adds to their charm. And the art is good too. What really stands out for me though are the terrific back cover advert parodies. Anyone who read American comics in the 1960s and ’70s would have been familiar with those wonderfully overblown ads, and it’s a testament to how good the parodies are that at first glance I didn’t release they were parodies. (Nostalgia for those classified comic book ads has grown to such an extent over the last few years that in 2011 they warranted their own book, Kirk Demarais’ terrific Mail-Order Mysteries).

Due to their rarity it’ll come as little surprise that Topps Krazy Little Comics are much sought after by collectors, with near mint copies changing hands for £200 ($250) each. But if you don’t have a couple thousand quid to spare, here are all six of the Marvel parodies.