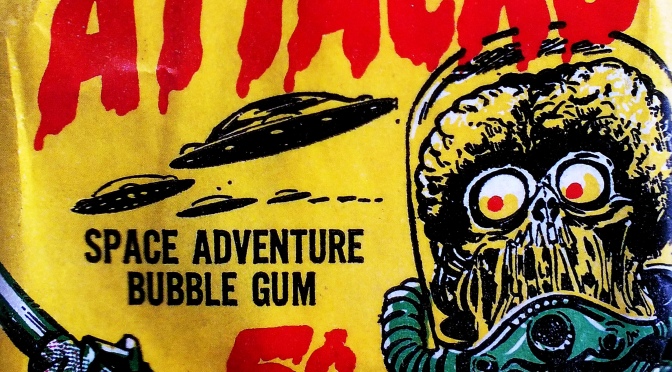 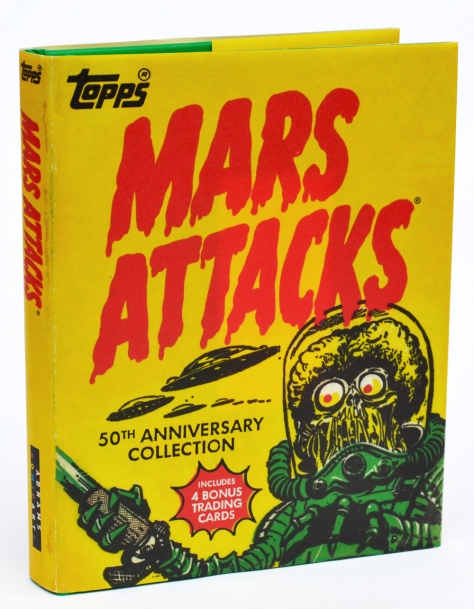 Published by Abrams ComicArts in 2012 Mars Attacks celebrates the 50th anniversary of quite possibly the most famous — or infamous — bubblegum trading card collection ever published.

By the early 1960’s bubblegum giant Topps had dominated the trading card industry for over a decade, and their winning formula was simple: collectable cards shipped with a stick of bright pink gum which sold for a few cents. Kids would buy these ‘blind’ packs and happily swap and trade cards with their pals until they had a full set.

Topps had recently enjoyed great success with a set of cards based on the American Civil War, so product developer Len Brown suggested a new collection based loosely on H.G. Well’s science fiction classic The War of the Worlds.

Impressed by his cover to Weird Science #16 (1952) Brown hired popular EC Comics’ artist Wally Wood to design the Martians, and provide layouts for the proposed 55 card set. Artist Bob Powell then supplied detailed pencilled artwork for each card while veteran pulp-magazine artist Norm Saunders painted the final artwork. Finally Brown supplied the captions that were printed on the back of each card.

The basic story was simple: Martians invade the Earth, where they proceed to wipe out the human population in increasingly lurid and gleefully sadistic ways, while simultaneously destroying as many famous landmarks as possible. After enduring countless horrors humanity finally fights back by invading, and then destroying, Mars.

Right off the bat the collection’s emphasis on sadistic violence and salaciousness raised eye brows at Topps, with the top brass demanding that some of the more lurid artwork be toned down. Their fears that the collection was a little too strong for kids proved true when, soon after the collection’s limited release, Topps received numerous complaints from concerned parents and teachers. A threat of legal action proved the last straw, and Topps pulled the entire collection before it could be distributed nationally.

In the decades since Mars Attacks has enjoyed a resurgence in popularity — fuelled in large part by the collection’s rarity and notoriety — with interest in the cards increasing steadily over the years. By 1994 interest had grown to such an extent that Topps reissued the original set, and expanded the collection by adding new cards which included 10 that were based on rejected artwork submitted by Wood and Powell over 30 years earlier. Mars Attacks fever finally reached a crescendo in 1996 with Tim Burton’s wonderfully kitsch movie Mars Attacks!

Mars Attacks: 50th Anniversary Collection is a 228 page hardback book that pays homage to this enduring trading card collection. Measuring just 6 x 7½ inches the book reprints the front and back of all the initial 55 cards, the later edition from 1994, as well as some of Wood and Powell’s original pencil sketches. The reproduction of the cards is of a very high quality aided by the bright white paper stock — Saunders’ painted artwork really shines. And the wraparound slip cover has been printed on greaseproof paper that emulates the original packaging (a nice touch). Finally the book is top-and-tailed by an introduction by Brown and an afterword by Saunders’ daughter Zina.

Also included with the book are four new collectors cards, which are OK, I guess. Although I appreciate the gesture I would have preferred reproductions of the original cards, instead of ones featuring new artwork. And I’m not quite sure what the reader is supposed to do with these new cards… swap them maybe?

Over the last few years several hardback books have been released celebrating Topps’ trading cards, with more planned (I’ve already looked at their Bazooka Joe and their Star Trek editions).

Even though Mars Attacks: 50th Anniversary Collection was released in 2012 it’s still in print and is definitely worth seeking out. The original collection is still wonderfully entertaining, aided by the terrific pulp-like artwork, and the ‘story’ is actually quite enjoyable. Due to their rarity cards from the original limited release are now prohibitively expensive (full sets in ‘good’ condition regularly sell for thousands of dollars) so for fans of the series — or for those who just want to see what all the fuss is about — this book is a must.