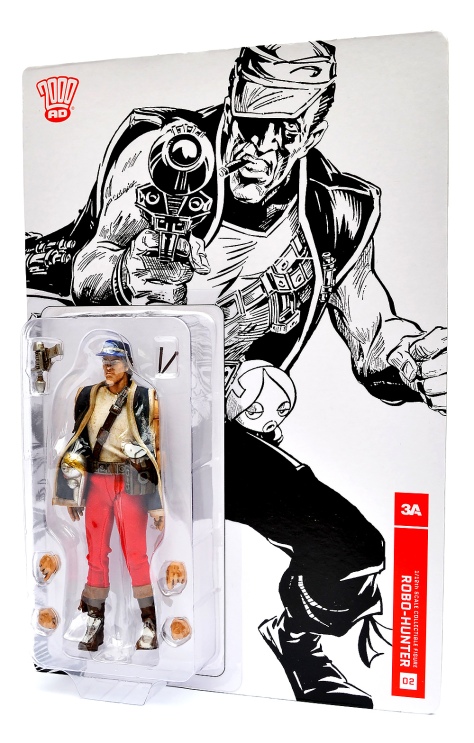 This year marks the 40th anniversary of 2000AD, the British weekly science-fiction anthology comic, and here at Taint the Meat we’re celebrating this milestone by taking a look at some cool 2000AD merchandise. This week it’s the turn of this Robo-Hunter action figure from 3A.

Sam Slade (“that’s S-L-A-Y-E-D, to you”), the Robo-Hunter, was a strip by John Wagner and Ian Gibson set in near future Britain. The story deals with the adventures of hapless private eye and bounty hunter Sam Slade as he negotiates the mean, robot-filled streets of Brit-Cit. The strip was funny, action-packed and a perfect fit of Wagner’s satirical writing style and Gibson’s wonderfully fluid artwork. Over the years Slade was been interpreted by other artists, but as it’s Gibson who made the greatest impression on the character it’s only fitting that 3A’s Robo-Hunter action figure should be based on his artwork.

Released in 2015 this fully posable action figure measures 6 inches in height, or 1/12th scale. The figure ships in a blister pack attached to a thick cardboard backing that features distinctive black and white artwork by Gibson. The figure is dressed in clothes faithful to Robo-Hunter‘s outfit from 2000AD, and Slade comes with several accessories: two changes of hands; two cigars; his trusty pistol and Cutie, his loyal robotmeter. 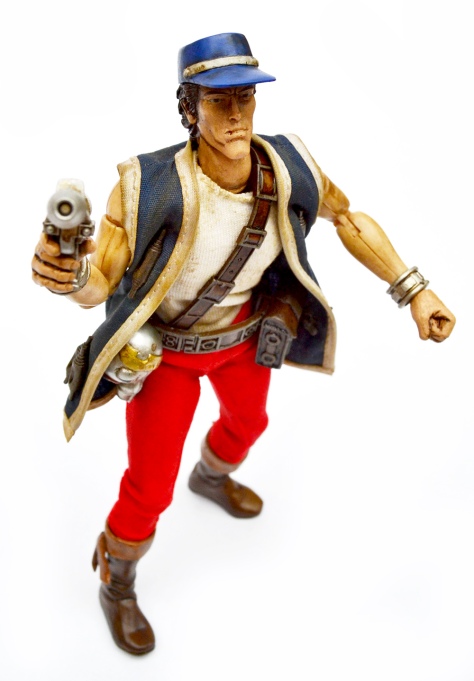 There’s both good and bad news when it comes to this action figure, but let’s look at the positive things first.

Well, to start with it’s Robo-Hunter! In toy form! I’m a huge fan of the character, especially the Wagner and Gibson version, so to have the chance to own an action figure based on Slade was a thrill. To my knowledge this is the first time Robo-Hunter has been immortalised in toy form so I jumped at the chance to own my own copy. 3A have a reputation for producing well made, highly detailed action figures and Robo-Hunter is no exception. The detailing on Slade’s face is of a high quality and the weathering on his clothes is also very well done. 3A’s attention to detail is admirable — everything from the band on Slade’s cap, to the metal accessories on his coat (what are they, anyway?) to the tassels on his boots have been lovingly recreated. In many ways this is a good action figure. But sadly it is hampered by a couple of factors that stop it from being a great one. 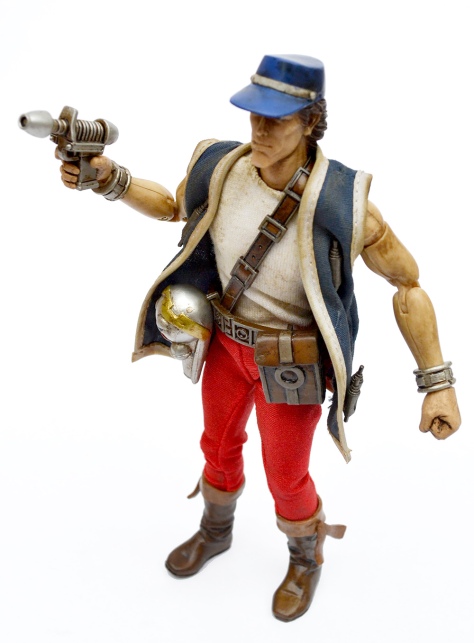 Good Lord, the price! Robo-Hunter retails at $50! Not $15, but five-oh dollars! That’s over £40 for a toy this size, which is frankly ludicrous (I got mine from Amazon which, included shipping, cost me £44). I appreciate that 3A have a reputation for producing toys at the more expensive, collectors-end of the toy market but £40 for a 6 inch action figure is just bonkers. It barely even stands up unaided. Maybe if the figure was bigger — say 8 or 9 inches — I wouldn’t mind the cost but £40+ for a toy this small is crazy, especially for one that barely stands up on it’s own.

Right, rant over. Despite evidence to the contrary I don’t really regret purchasing this toy (although I’ll admit the fact that I knew I would post about it here did relieve the costs sting) as I have such great affection for the character. After Judge Dredd Robo-Hunter was always my favourite 2000AD strip and, on this occasion, my desire to own the action figure outweighed my common sense on the cost.

Robo-Hunter is the second release from 3A based on characters from 2000AD. Unsurprisingly Dredd was the first and the following releases have been based on Dredd’s foes, the Dark Judges. I’m not sure I’ll bother with them though as the cost is just too prohibitive (during my last visit to the Forbidden Planet store on London’s Shaftsbury Avenue I noticed that the Dredd figures were heavily discounted — obviously I’m not the only one who has a problem with the price). If 3A do decide to release any other, non-Dredd figures from 2000AD I’ll see about buying another, but I suspect when it comes to this range of toys, it’s one and I’m done.