This is classic Sunday afternoon film fare. Made in 1958 the film portrays the exploits of the crew of an allied army ambulance separated from the rest of their company during the evacuation of Tobruk in North Africa in 1942. The crew is made up of an emotionally exhausted Captain (played by John Mills) a nurse, a sergeant and a South African officer they pick up on the way – and who they quickly suspect may not owe his allegiance to the Allies. They must travail minefields, quicksand and over 600 miles of desert with only the faint hope of finding safety and the promise of an ice-cold beer in Alexandria to sustain them.

END_OF_DOCUMENT_TOKEN_TO_BE_REPLACED

“I’m seeing something that was always hidden.
I’m in the middle of a mystery and it’s all secret”

“Whatever I photograph I always lose”

Michael Powell’s 1959 study of a serial murderer who films his victims last moments is as much a tour-de-force as his better known films, The Red Shoes and Black Narcissus to name a few. At it’s core the film depicts Mark Lewis, a psychologically damaged photographer (played with real compassion by german actor Carl Boehm) as he murders a string of London prostitutes and glamour models, filming their dying moments so he can watch their last moments again and again. But the film is so much more than than the study of a murderer and as the film progresses it becomes a carefully crafted essay on the voyeuristic nature of cinema. END_OF_DOCUMENT_TOKEN_TO_BE_REPLACED

“You don’t understand, Jill. People like that have something inside… something to do with death.”

In December 1966 directors Sergio Leone, Bernardo Bertolucci (“Last Tango in Paris”, “The Last Emperor”) and Dario Argento (“Suspira”, “Tenebrae”), three life-long fans of the American Western, discussed the possibility of creating a new film incorporating well-worn motifs and cliches from the genre. The film would not just be a pastiche but something new, a homage that would be greater than the sum of it’s parts – a new kind of Western. Over the next few months they created a story outline referencing over 50 other Westerns – from films as diverse as “Iron Horse” (1924) to “Johnny Guitar” (1954), “High Noon” (1952) to “The Searchers” (1956). They incorporated well used character motifs such as the gunfighter bent on revenge, the thief with a conscience, the stone-cold killer and the whore with the heart of gold. END_OF_DOCUMENT_TOKEN_TO_BE_REPLACED 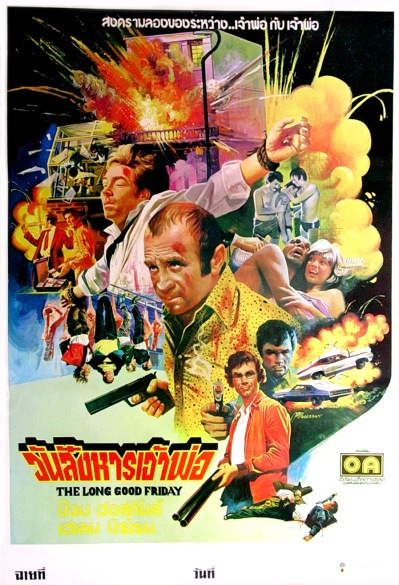 While hunting for a suitable header image to my post on The Long Good Friday I found this gem. I’ve no idea what country it’s from but it’s great. I love that special emphasis has been given to the crucified security guide even though he only appears fleetingly at the end. And Bob Hoskins disco shirt is great.

“You don’t crucify people! Not on Good Friday!”

I’m still in a thriller/gangster mood so tonight it’s the turn of The Long Good Friday (1979). A refreshingly detailed and thoughtful script, great characters and a memorable soundtrack combine to infuse this film with a freshness and vitality that endures to this day. It’s also got a great cast: Bob Hoskins (in his breakthrough role); Helen Mirren; Paul Freeman; Derek Thompson; Eddie Constantine; Pierce Brosnan (in his first film appearance) and a very young Dexter Fletcher (blink and you’ll miss him). It’s even got Jacko from Brushstokes! END_OF_DOCUMENT_TOKEN_TO_BE_REPLACED

“He was some kind of a man.
What does it matter what you say about people?”